White flour is a wonderfully diverse dry good and a valuable part of any home food storage plan. The problem is that white flour, along with other milled products, has a short shelf life and needs to be rotated frequently.

What is the actual shelf-life of white flour? The actual shelf-life of white flour will vary depending on storage conditions. You will achieve the longest quality shelf life by storing white flour in an air-tight container (#10 can, Mylar bag, mason jar, or PETE plastic bottle) with an oxygen absorber. The oxygen absorber extends the quality of the life of the flour and prevents any insects from surviving in storage.

It is almost impossible to control all of the variables in this experiment but we gave it our best effort. We made three batches of bread using the exact same recipe. You can see the experiment in this video.

We used a basic recipe for white bread from PantrySecrets.com. The recipe calls for white flour, sugar, salt, liquid lecithin, yeast, and water. Each of these ingredients is shelf-stable and a reasonable basic item to be kept in a kitchen pantry.

The recipe was made 3 separate times with 10 1/4 cups of the white flour being tested. All dishes and utensils were completely cleaned between batches. The same pans were used with the exception of the 19-year-old white flour due to a shortage of baking pans.

Participants in the tasting groups were informed about the age of the flours used to make the bread but were not told which specimens were made from each of the flours.

The flour for the control batch with the fresh flour was purchased from Costco in a 25-pound bag the day before the test was conducted.

The flour looked and smelled fresh. Four loaves of bread were made using the designated recipe. The loaves turned looked, smelled, and tasted delicious.

All 6 of the participants in the tasting group identified the bread made with the fresh flour as their favorite. The majority of the tasters identified it as the loaf made with fresh flour.

The flour used for this batch came from a #10 can of unbleached white flour that was packaged in 2003, making it 19 years old at the time of the experiment. There was an oxygen absorber found in the #10 can. The flour had a slightly yellow appearance and a faint smell of metal. It was more gritty than the fresh flour.

The flour performed much as would be expected but there was a noticeable difference from the fresh flour. The dough was not as elastic. The bread raised and browned nicely. The final visual result of the final bread product was comparable to the baked loaf of fresh bread.

The taste test results were a little bit surprising. While participants preferred the loaf of fresh flour bread, all the participants indicated that this bread tasted good and was edible.

The flour used for this batch came from a #10 can of white bread flour that was packaged in 1994 with an oxygen absorber. The first can that we opened had dark spots of mold growing in it. The flour was unsafe to use.

The second can of flour packaged in 1994 looked and smelled safe, although there was an odor that was slightly unpleasant but not offensive. It had tiny “lumps” in it and the flour was incredibly fine. The decision was made to attempt to make bread out of the flour.

The dough took significantly more water than the other batches even though the exact same amount of flour and other ingredients were used. The dough was not very elastic and was more difficult to work with than either of the other batches.

The final product was disappointing. The bread did not brown well even though it was cooked in the same oven, at the same temperature, for the same amount of time as the other loaves. It was taken out of the oven with an internal temperature of 195 degrees F.

What does bread made from 28 year-old flour taste like?

The participants in the tasting group all identified this as the bread made from the oldest flour. Comments included; bad aftertaste, chewy, cracked loaf, funny smell, not my favorite, I don’t like it, and I’d eat it if I had to. The consensus was that it was not enjoyable or edible.

This study provided some valuable insight into how the quality of white flour changes as it ages. Ideal storage conditions including correct packaging in an airtight container with an oxygen absorber and cool temperatures can significantly impact the quality shelf-life.

The optimal maximum shelf life for white flour is about 5 years depending on storage conditions. While older flour may remain edible, quality and nutritional value diminish in storage. The best way to ensure that you have quality white flour in your home food storage is to rotate it every few years.

You can learn more about how to store dry goods in these posts. 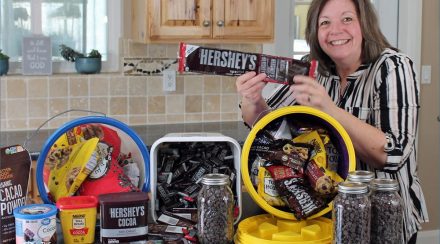