Our friend, Kathy Kay, relives the days before electricity when washing clothes was an all-day chore. I greatly appreciate the age-old wisdom.

Doing the laundry was a big deal. It required two days out of the week to complete. For thousands of years, one of the most drudgerous and tiresome jobs that a woman was required to do was the laundry. To begin with, women often took their clothing and linens down to the creek or river and pounded and rubbed them on smooth stones.

My Grandmother Clarice once told me about an incident that happened when she was a little girl along the banks of the Escalante River just north of the town of Escalante. The town had only been established for one year when she was born so you can see that this happened a long time ago. The women had gathered to wash their clothes and socialize. One of the ladies had a newborn baby that she had settled down for a nap a short distance away from the hustle and bustle of the laundry chores.

An eagle high in the sandstone cliffs spied the baby and swooped down and before the women could stop it, picked the baby up in its talons and flew off with it! Some of the desperate women rushed back to town and found some of the men. One of them knew where the eagle had her nest high up in the side of the cliffs. As rescue party was soon on its way.

The men had to scale nearly vertical walls of the canyon and that took precious time. Fear filled all the hearts of both the climbers and those anxiously waiting below. They found the baby unharmed squalling heartily in the rough nest with the Eagles’ chicks. The baby was unharmed other than a few scratches from the eagle’s talons. Perhaps the baby’s cries were enough to intimidate the eagle from killing and tearing at it.

Fortunately, we don’t have such problems on our washdays these days.

Washday had to begin first with the soap-making day. To do this women saved and strained all of their meat drippings. A large brass kettle was placed over an outside fire to cook. Into it was placed cold water, an equal amount of melted and cooled fat, lye, borax when they could get it, and ammonia.

The lye and water were brought to a boil and let stand until cool. Then the ammonia and borax were added along with the melted fat. Then it was a matter of stirring until the soap began to congeal. It was poured out onto a container to harden and then be cut into bars.

I suppose the first few marvelous inventions for washing was the round tin tub and washboard. After the water had been hauled by buckets from the well or stream, it had to be heated. Of course, this required lots of wood to be chopped for the fire. Into the heated water was peeled off slivers of the homemade soap so that it would dissolve more quickly. Then it was time to scrub-a-dub-dub.

After this, the white articles were placed into a large copper boiler that was filled with boiling water on the kitchen stove. The clothes were then boiled for around fifteen minutes in the water that also contained lye and perhaps borax or ammonia. A large wooden paddle was used to stir the fabrics around.

Finally, the clothing and linens were rinsed into two tubs of water. One tub often containing bluing to help whiten and brighten the clothes but the trick I found most interesting was that of laying the whites out on the grass so that the sunshine could smack them straight on and bleach out any remaining stains.

Clothesline were also quite a wonderful invention though in winter the clothes would come inside frozen as stiff as boards. I remember Momma throwing sheets and diaper over the heaterola stove in the living room to finish drying and thawing. She sometimes forgot them and they ended up with scorch marks in the shape of the holes in the grate work covering the stove.

Daddy told me that it was a very progressive invention when a wooden barrel shaped washing machine finally came to the ranch. It had a handle that he spent hours turning on washday to run the agitator. This was often done outside under the shade of the trees.

Our grandmother’s washday was a long, hard day. Glad we live today!”

Thanks to Kathy we can learn a little bit about how laundry was cleaned without modern inventions. I don’t ever want to go back to those days. A long-term power outage may require a little creativity, but if we plan ahead at least we won’t have to make our own laundry soap first. Our family goes through one 126 load container of liquid laundry soap every 6-8 weeks. That means that a one year supply for us is about 8 containers. 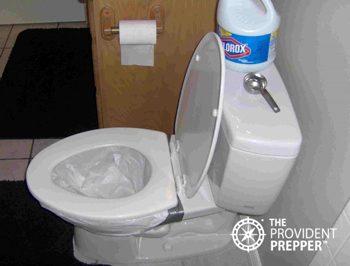 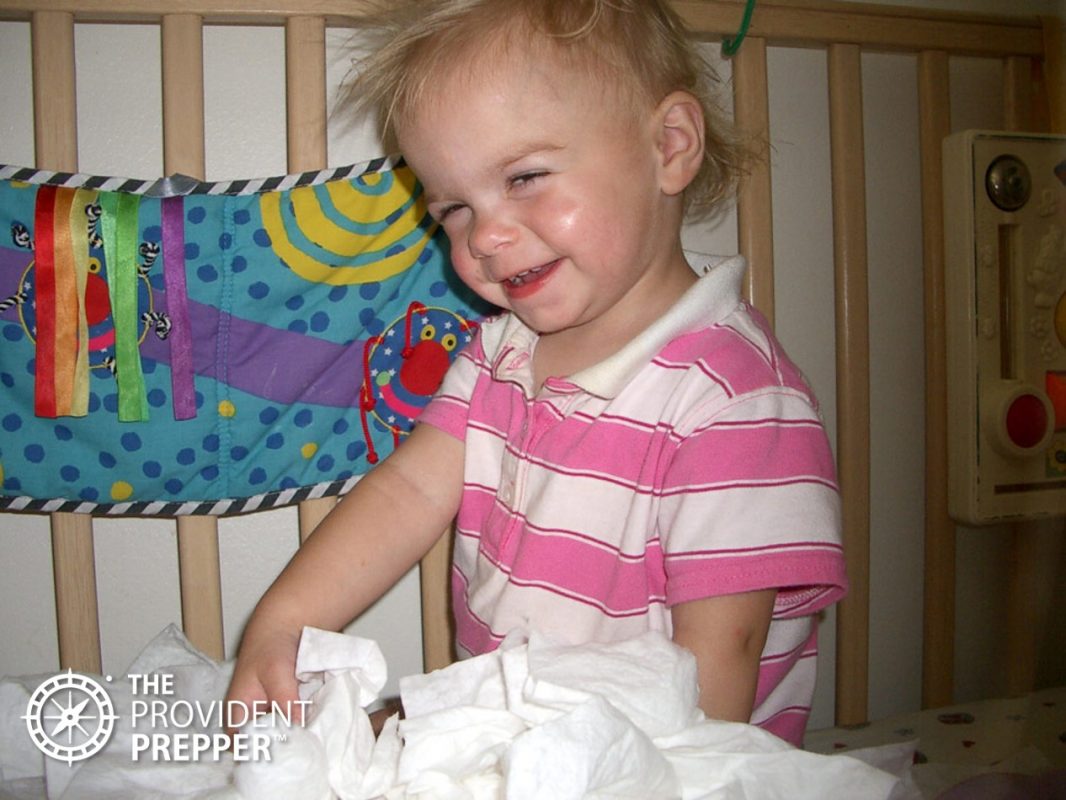 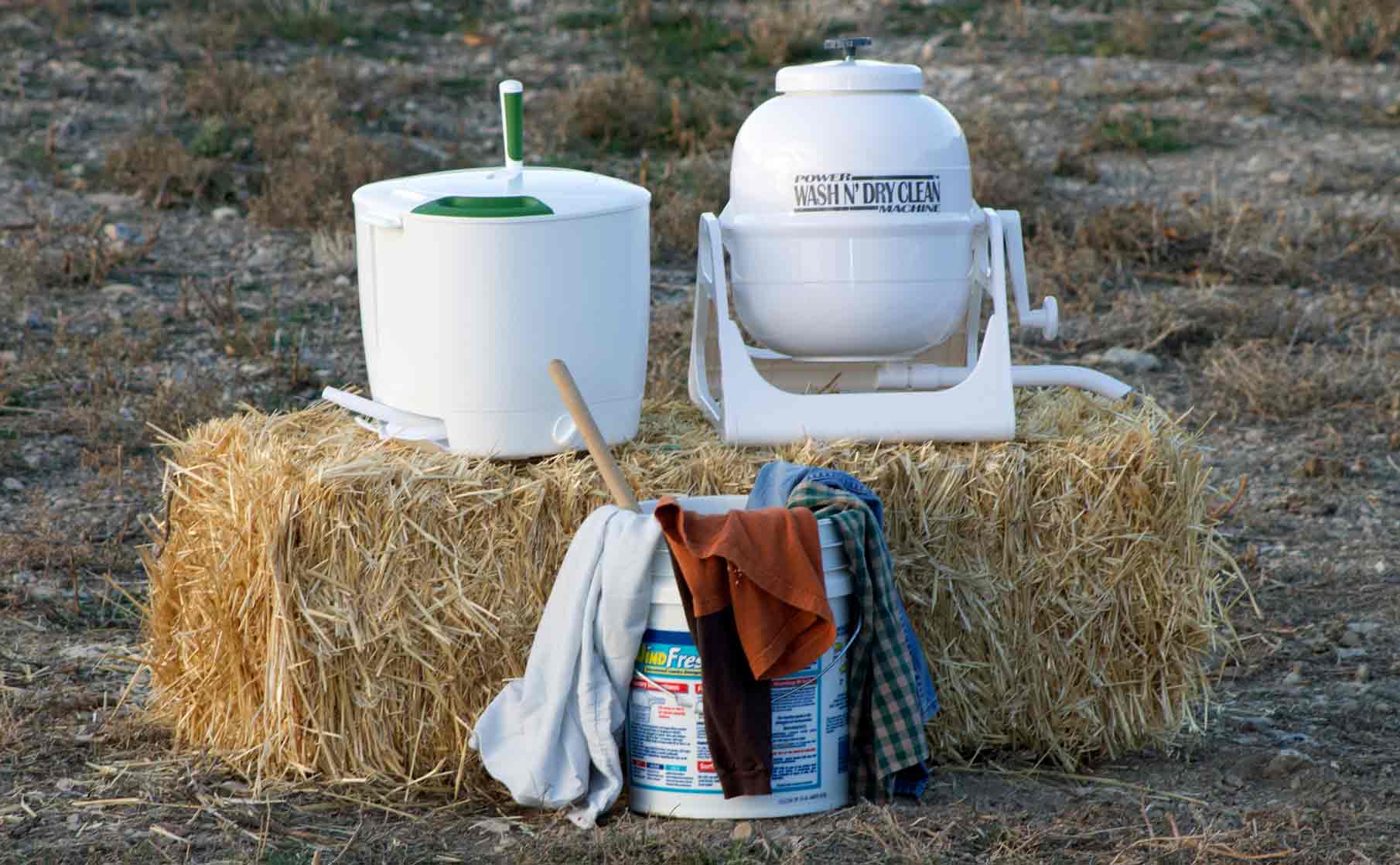